Hide and Seek: The Game of Airbnb Host Compliance

Since Airbnb launched in August of 2008, large numbers of travelers are choosing short-term rentals as their accommodation over traditional hotels. And with the number of properties available on the platform shooting up around the world, Airbnb enters an uncertain future as city legislators move short-term rental regulation and Airbnb host compliance to the top of their agenda.

View Active Rentals In Your Market

There’s no doubt that the problem is complex. It is one that involves a wide range of issues such as individual property rights, public safety, affordable housing, and economic stimulus. Every city seems to be taking a different approach to balancing the priorities of the local residents and business owners. The result is a patchwork of new restrictions and penalties intended to gain control over the proliferation of new rental properties.

Globally, cities are implementing licensing requirements to limit the number of new rentals and better monitor the activity of existing ones. But, licensing requirements are only as effective as the compliance these cities are able to achieve. Our findings show that strict usage laws, taxes, and cumbersome registration processes have driven most Airbnb hosts underground, who find ways to hide their addresses and identify to avoid onerous new restrictions and taxes.

AirDNA has identified 365 cities around the world that had some sort of licensing requirement. Of those, in only 3 cities (0.8%), the majority of the Airbnb rentals had a license number displayed. 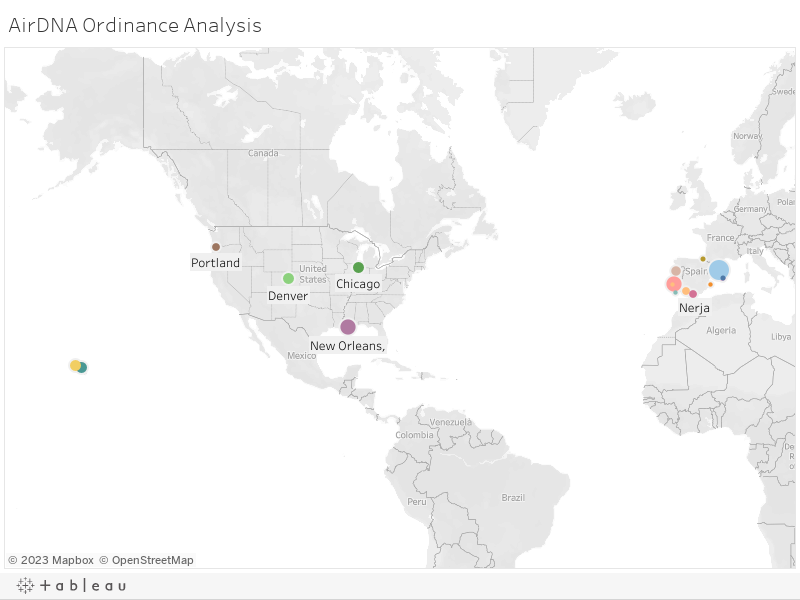 Here, we look at the top 25 most compliant cities and the revenue that goes uncollected for each municipality when considering the non-compliant listings.

*Revenue numbers for mainland United States are based on reported tax rate collected. For all other countries and Hawaii, we assumed an 8% tax rate.

To start, we dug into Chicago, New Orleans, Denver, and Barcelona – 4 of the cities with the highest license percentage – to better understand regulations and ordinances, compliance with those ordinances, how much each city has cracked down on non-compliance and the root of the desired control.

The Approach to Airbnb Host Compliance

Chicago and New Orleans: Strict enforcement, but easy to comply

In Chicago and New Orleans, 92% and 91% of active Airbnb listings either have a license or have applied for a license respectively. Both cities have strict enforcement their short-term rental ordinances, but each has its own method of enforcement.

For many cities, the question regarding how to enforce rules and gain compliance is tricky, but Chicago has been innovative in its enforcement. Rather than hosts applying for their licenses directly through the city, Chicago passes the onus onto Airbnb and other “Rental Intermediaries.” This means the city will not take direct requests from hosts for licenses. Licenses will only be issued from the city to a host when Airbnb has requested the license on behalf of the host.

New Orleans, on the other hand, has charged seven city staff members with managing permitting and infractions of the ordinances – and are arguably pursuing infractions more aggressively than any other city in the U.S. As of March, more than 400 notices of infractions have been issued and in August 2017 $75K in fines for illegal short-term rentals were handed down.

One ordinance New Orleans does not mess around with is that short-term rentals in the French Quarter are strictly prohibited unless they’re in the Bourbon Street entertainment district. The city is hoping to incentivize landlords to invest in improvements of upper floors along Bourbon street with this rule.

Neither city is afraid to enforce the possible fines when a host is in violation.

With 47% of active listings holding licenses, Denver’s registration compliance rate is notably less than that of New Orleans and Chicago. What’s the reason? Denver has taken an approach to compliance that relies heavily on outsourced software that has failed to deliver on its promise. In 2017, Denver budgeted for $70.4K annually to allocate toward host compliance software which claims to be able to identify addresses and owners of short-term rental properties but has failed to deliver on that promise.

The cat-and-mouse game of Airbnb hosts dodging steep taxes by obfuscating their property’s location and true host identity sees no end in sight.

The lower registration percentage rate could also have to do with Denver’s taxes being at the high end of other cities in the United States with a tax rate of 14.75%.

But we wonder if it’s possible that Denver spent a lot of money on a software system that takes more maintenance than the city planned for.

With 42% of its active listings registered, Barcelona’s relationship with short-term rentals and the Airbnb platform has been a contentious one. For a long time, Barcelona refused to recognize independent short-term rental properties differently than commercial vacation rental spaces and held hosts to the same standards. Commercial standards include obtaining a registration with the Catalan Tourism Register, keeping records including a copy of the passport for each guest and registering each guest online with the city within 24 hours of check-in.

In 2016, the city raised the maximum amount of fines for apartments that were rented but not properly registered from 60K euros to 600K euros. Barcelona also fined both Airbnb and HomeAway 60K euros each for advertising homes that weren’t registered. However, in early 2017, Barcelona changed its take on non-professional home sharing and claims that the practice is a-legal, meaning it is neither legal or illegal and it is unregulated. While the city still claims that Airbnb operates outside of legality, there are no structured regulations for Airbnb to follow currently. Airbnb released data that shows that 1.24 million guests used Airbnb in Barcelona in 2016.

The table below outlines more details regarding city methods for staying on top of short-term rentals in their jurisdiction.

Municipalities wishing to be Airbnb-host-friendly will have implemented the following best practices for better compliance:

The easier the process, the higher adoption rates will be as long as high tax rates do not continue to drive hosts underground. The higher the tax rate, the more people will determine the risk of getting caught outweighs the amount they would have to pay to be in compliance.

All-in-all, thriving municipalities will have focused on making it simple for inhabitants to understand and comply with the city’s rules, taking advantage of economic growth opportunities like the sharing economy, all while maintaining the city’s integrity.

Share short-term rental analytics and insights with your friends!