Holiday Cheer Ahead for Europe as Demand, Revenues Continue Recovery

While the European short-term rental sector is not out of the woods yet, it hit some important post-pandemic recovery milestones in October for both bookings and revenue growth.

Demand, measured by the number of listing nights stayed over the previous month, was just 8.3% below that of October 2019 (+48.9% over 2020). This is a substantial improvement from September, when demand was 25% lower than in 2019, and the highest percent change since the start of the pandemic.

Average daily rates (ADRs) increased in October as well, rising 24.7% over 2019. The combination of rising rates and strengthening demand has finally resulted in positive revenue growth for the sector. European short-term rentals generated record revenue in October 2021, 16% higher than in October 2019 and up from an average of 7% less revenue in Q3 2021 over Q3 2019.

Recovering demand also pushed occupancy to a new October high of 54.7%, breaking the previous record of 53% in 2018. However, these high occupancy rates are due in part because the supply of available listings has yet to recover. As of October 2021, listings were still 5% lower than in October 2019.

In September, only Germany saw positive demand growth over 2019, but in October, four major European countries exceeded 2019 demand levels. Even with rising COVID-19 cases, demand growth rose in both Russia (+31.3%) and Germany (+12%). France (+4.2%) and Switzerland (+2.9%) also achieved positive growth for the first time since 2019.

Meanwhile, Hungary (-42.5%) and the Czech Republic (-51.9%) saw the steepest continued declines in demand over 2019. While demand continues to fall for many countries, demand in all 20 major European countries improved from September to October over 2019.

French Demand Rises Outside of Paris

Throughout 2021, short-term rental demand growth in France has been volatile. Demand first reached 2019 levels back in February and May of 2021. But when travel in France peaked for the year in August, demand ultimately fell short of 2019 levels by 8.6%. In October, demand once again exceeded 2019 levels, increasing by 4.6%. When compared to 2020, overall demand in France was up by 36.3%.

With rising levels of demand, occupancy reached 50.8% for the month, beating out past years. Occupancy in France has now topped 50% for five months in a row. 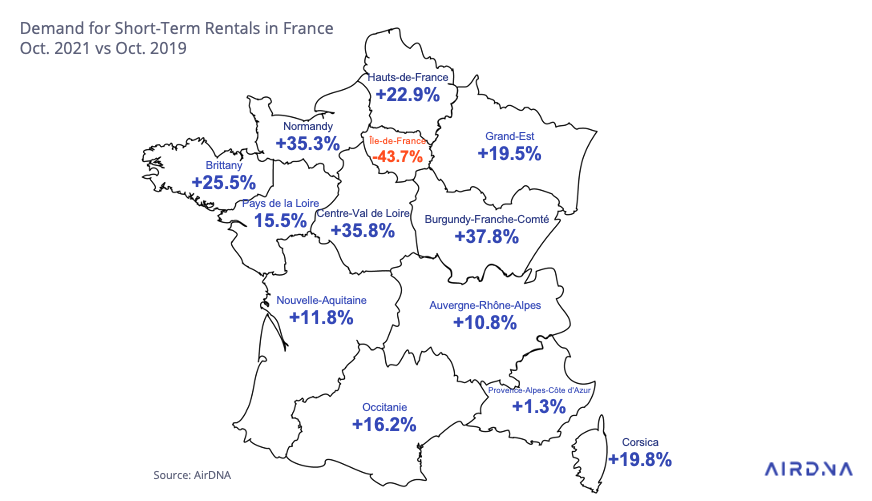 An increase in stays outside of major cities is driving demand in France. Of the major French regions, demand failed to surpass 2019 levels only in Île-de-France, which includes Paris. Demand growth among domestic travellers is strongest in the rural regions of Burgundy-Franche-Comté and the Centre-Val De Loire.

While overall demand is growing in each region (except Île-de-France), other large cities within France, including Nice (-34.8%), Lyon (-33.5%), Cannes (-25.7%), and Marseille (-11.6%), have yet to share in this recovery. This highlights the strength of the demand outside of major cities.

Like ADRs in Europe as a whole, ADRs in France have increased. In October, ADRs were up 23.8% over October 2019. Stronger demand outside of cities, where homes are larger and ADRs are generally higher, has pushed rates higher in the shoulder seasons of autumn and spring. In August, when demand typically focuses outside of cities, ADRs were only 11.2% higher than in 2019. This suggests that current ADR growth is driven less by rate inflation and more due to the fact that different types of homes, lofts, and villas are being rented than in 2019.

As in France, guests throughout Europe have yet to find their way back to cities—similar to the situation in the United States. In October, demand was still 48% below 2019 levels in the 25 largest European cities, while demand outside of those cities, including resort/holiday destinations and small and midsize cities, was 4.3% higher than in 2019.

As of October, eight of the 25 largest cities had yet to exceed 50% of their pre-pandemic demand levels over the past 20 months. Given the sustained period of low demand, many listings have either left short-term rental platforms or temporarily converted to other uses. The number of available listings has dropped by more than half in five of these markets: London, UK (-52%), Budapest, HU (-56.4%), Amsterdam, NL (- 56.6%), Prague, CZ (-59.8%), and Dublin, IE (-64.8%).

These cities, where cross-border travellers averaged more than 65% of short-term rental guests before the pandemic, should all benefit from the return of international visitors in the months and years ahead.

Pacing for the next three months continues to improve. Future pacing for Europe is down about 17% over 2019 and varies substantially by month. Given the current shorter booking window for most travellers, actual demand figures should come in well above present pacing.

Denmark leads the major European countries for pacing, with nights booked rising 6.4% over 2019. Most of those gains are in January, when pacing is up 40%. Countries with popular ski destinations in the Alps lead the rest of the countries for winter travel, including France, Switzerland, Germany, and Austria.

The holiday season is driving the majority of bookings, with demand during Christmas week a full 80% higher than the week before Christmas. As of mid-November, demand was still pacing 17% lower than in 2019. However, ADRs are 24% higher, propelling total revenue a full 4% higher than in 2019.

With travel restrictions easing and large portions of Europeans vaccinated, it appears that this holiday season will be vastly different than last year. Christmas booked nights are 114% higher than in 2020, and even New Year's Eve looks to be back, with almost 700,000 listings already booked throughout Europe. While that is 23% lower than in 2019, it is 112% higher than in 2020.

Recovering demand and record occupancy and revenue in October give European short-term rental owners and operators many reasons to celebrate as we head into winter. Risks remain, especially with COVID-19 cases rising throughout much of Europe. However, as international borders open and travellers venture back into cities, the industry should see a strong 2022.

Get started with MarketMinder today.

With powerful, easy-to-use tools, MarketMinder helps hosts and investors succeed in the short-term rental market. Ready to jump in?

Try it for free